President Moon Jae-in has consistently stressed the need for dialog toresolve tensions on the Korean Peninsula and to open a new era of peace.North Korea and the United States have responded to his determinationand sincerity, and peace overtures around the 2018 PyeongChang WinterOlympics have led to a dramatic thaw in relations.

On April 27, 2018, Chairman of the State Affairs Commission Kim Jong Un crossed the border into South Korea for an inter-Korean summit held at the Peace House on the southern side of the border village of Panmunjeom, becoming the first North Korean leader to set foot on South Korean soil. During the historic summit, President Moon Jae-in and Chairman Kim Jong Un agreed to facilitate groundbreaking advancements in inter-Korean relations, and to establish a permanent and solid peace regime on the Korean Peninsula by signing the “Panmunjeom Declaration for Peace, Prosperity and Unification of the Korean Peninsula.” 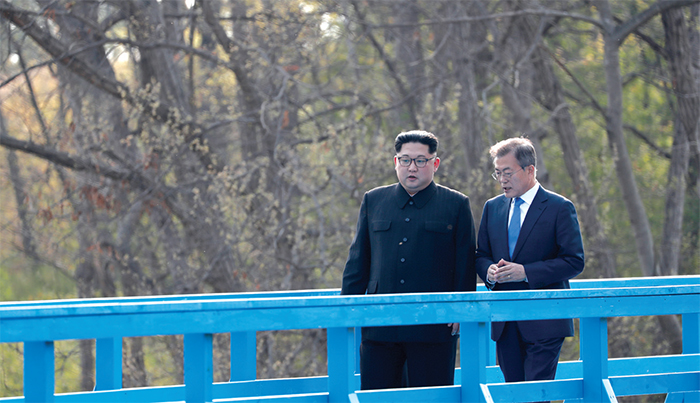 The major agreements made in the Panmunjeom Declaration are as follows:

△Confirmation of realizing complete denuclearization and a nuclearfree Korean Peninsula △Pursuit of holding multilateral meetings with a view to declare an end to the war within 2018, and establishing a permanent and solid peace regime △President Moon Jae-in’s planned visit to Pyeongyang in the autumn of 2018 and the holding of regular meetings between the leaders

North Korea’s additional pledges to dismantle its Punggye-ri Nuclear Test Site in public view and to change its time zone to match that of South Korea were implemented in May 2018.

The most crucial part of the Panmunjeom Declaration, which was North Korea’s strong will to denuclearize, immediately drew massive global media attention. CNN said, “The two Koreas will bring a formal end to the Korean War, ceasing 64 years of hostilities,” while CCTV commented, “South Korea and North Korea eased military tension and paved the way for complete denuclearization on the Korean Peninsula.”

On May 26, 2018, the South Korean and North Korean leaders met again at Tongilgak on the northern side of Panmunjeom. Their second summit called for cooperative efforts to implement the Panmunjeom Declaration and to successfully hold the planned North Korea – US summit. The two leaders also reaffirmed their commitment to meet at any time and any place if the need arose. The 2018 Inter-Korean Summit was a watershed moment for denuclearization and peace on the Korean Peninsula as well as the advancement of inter-Korean relations. Their severed ties have been reconnected, and Panmunjeom, which had been a symbol of division, has become a symbol of peace.

In addition, the successful inter-Korean summit laid the groundwork for the first North Korea – US summit held in Singapore on June 12, 2018. The back-to-back summits between the leaders of the two Koreas as well as the leaders of the United States and North Korea became milestones toward the peaceful resolution of North Korean nuclear issues and peace on the Korean Peninsula, a goal fully shared by the international community.